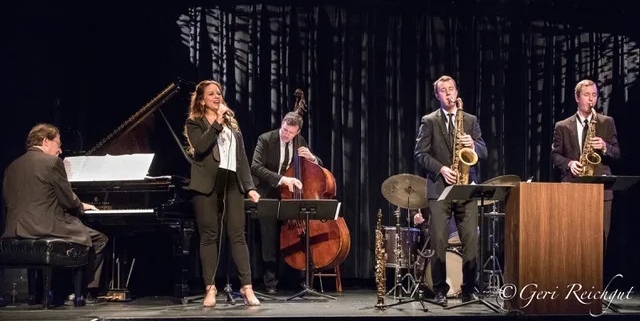 CONWAY NH – Identical twins Peter and Will Anderson have performed concerts together since the age of 9. They’ve graduated Juilliard, performed on Broadway, at Carnegie Hall, The Kennedy Center and at the New Orleans Jazz. Festival. In this performance, they’ll cover the work of the greatest tin-pan-alley songwriter, Irving Berlin. His masterpieces include Blue Skies, Puttin’ on the Ritz, Cheek to Cheek, God Bless America, and White Christmas. Berlin is considered one of the greatest songwriters in American history with a body of work totalling over one thousand songs.

The Andersons can be heard on the Grammy-Winning soundtrack of HBO’s Boardwalk Empire with Vince Giordano’s Nighthawks. They received a Drama Desk Nomination for their Off-Broadway Production “Le Jazz Hot” in 2012. Aside from leading performances in over 45 U.S. States, in Japan, Brazil, Canada and the U.K., they’ve lectured at over a dozen Universities. including Florida State, Xavier, Temple, and Ohio State.

On the Main Stage of the Majestic Theatre. Admission limited to those over 18 or accompanied by parent / guardian.